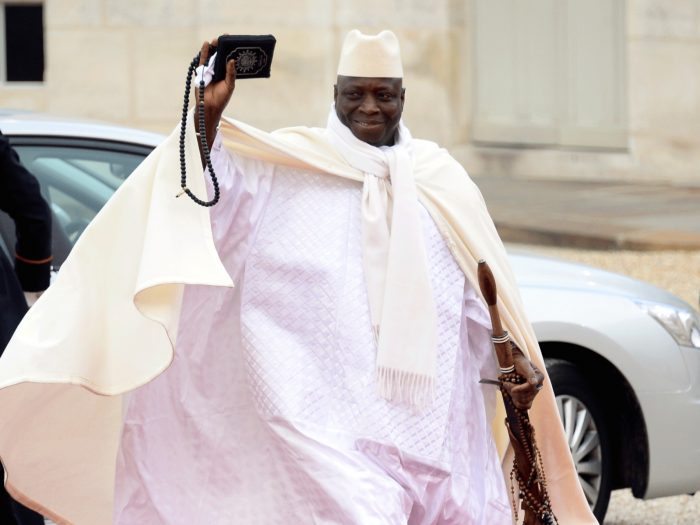 FILE: Gambia’s President Yahya Jammeh arrives at the Elysee palace to participate in the Elysee summit for peace and safety in Africa, on December 6, 2013 in Paris. | AFP/Alain Jocard/Getty Images
Gambia’s former president, Yahya Jammeh has left Banjul, the capital of Gambia on Saturday, January 21, 2017 with President Alpha Conde of Guinea, to begin a new life in exile.
This followed Friday’s final peace move by Conde and Mauritania’s President Mohamed Ould Abdel Aziz.
The two West African leaders travelled to Banjul to persuade the long ruling Jammeh to leave peacefully before West African forces pounced on him.
In a statement issued on state TV Friday night, Jammeh announced that he was stepping down, a superfluous announcement as he was already no more the leader, having been denied recognition by the world.
All indications are that Jammeh will be going into exile in Guinea.
A senior adviser to new President Adama Barrow said talks to finalise the exile deal were holding up his exit.
“I can assure you that he has agreed to leave,” Mai Ahmad Fatty, Barrow’s special advisor, told Reuters in Senegal’s capital Dakar. He could not say where Jammeh would go into exile.
President of The Gambia, Adama Barrow had earlier confirmed Yahya Jammeh’s stepping down.
Barrow, on his twitter handle on Friday, @adama_barrow said: “I would like to inform you that Yahya Jammeh has agreed to step down.
“He is scheduled to depart Gambia today. #NewGambia.”
Barrow on Thursday took the oath of office as Gambia’s new president.
He was sworn-in about 5p.m. Senegalese time at the Gambian High Commission in Dakar, Senegal.
Barrow succeeded Yahya Jammeh, who lost in the Dec. 1 presidential election and refused to vacate office when his term expired midnight on Thursday.
Gambia’s Chief of Defence, Ousman Badjie, on Friday pledged loyalty to President Barrow.
“West African troops that crossed from neighbouring Senegal into Gambia to help unseat Jammeh would be welcomed “with a cup of tea,’’ said Badjie.
ECOWAS armies halted Operation Restore Democracy aimed at installing the country’s new president, Adama Barrow, on Thursday so regional leaders could make one last attempt to convince long-time ruler Yahya Jammeh to step aside.
In Dakar, the Nigerian force Commander, Operation Restore Democracy, Air Commodore Tajudeen Yusuf, said the ECOWAS forces will not let down their guard, inspite of negotiations for the former Gambian president, Alhaji Yahaya Jammeh to leave office.
He said the troops are awaiting briefing by the political leaders.
Yusuf made the statement while briefing newsmen in Dakar, on Friday.
“Even if he quits we are not letting down our guard, our mandate is to restore peace in Gambia.
“We have been on standby, and the troops are still on a very high alert, depending on the outcome of political negotiations.
“We are not letting down our guard; our mandate is to restore democracy in Gambia,’’ Yusuf said.
Yusuf added that the mandate given to them was to restore peace and nothing else.
He promised to carry out his responsibilities professionally while waiting for further directive from the political masters.
Jammeh, in power since a 1994 coup, initially conceded defeat to Barrow following a Dec. 1 election before back-tracking, saying the vote was flawed. (Yahaya Isah/Dakar/NAN)