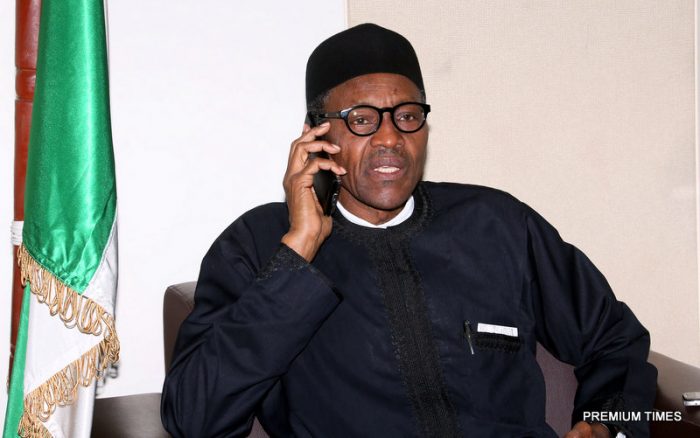 President Muhammadu Buhari in a 2015 photo | Premium Times
Contrary to the claims it made earlier that President Muhammadu Buhari would soon return home, the Nigerian presidency on Tuesday, February 21, 2017 changed its tune and said that the ailing president would be extending his medical trip to London for much longer.
A statement issued by Femi Adesina, a spokesperson to the president, said that “President Muhammadu Buhari thanks millions of Nigerians who have been sending good wishes and praying for his health and well-being in mosques and churches throughout the country.”
“The President is immensely grateful for the prayers, show of love and concern,” the statement said further.
“President Buhari wishes to reassure Nigerians that there is no cause for worry.
“During his normal annual check-up, tests showed he needed a longer period of rest, necessitating the President staying longer than originally planned.”

Rumours about the health status of the president continue to swirl on cyber-space after a fake news website reported that Buhari had passed on.
The Nigerian presidency has debunked the rumour and said that the retired military general, 74, is “alive and well”.
“He is alive and well! President Buhari is not magical. He cannot be holidaying in the UK and be in Germany, dead or alive at the same time,” Garba Shehu, one of Buhari’s spokespersons, said in a short post on his Facebook page.
The president left the country on January 19, 2017 on a 10-day leave. While making the official announcement, presidential spokesperson, Femi Adesina had assured that there is nothing to worry about the president’s routine medical checkup while on his vacation.
The president himself also made it clear that there is nothing wrong with going on vacation, just before stepping into the presidential jet.
The president was expected to return to the country on February 6, 2017, the same day that the presidency issued a statement saying that he had extended his medical leave indefinitely due to health reasons.

Early June 2016, Buhari took a 10-day vacation and flew out to London to “check a minor ear infection”. A day in advance of his trip, Mr. Adesina announcing that “during the holiday, he will see an E.N.T. specialist for a persistent ear infection. The president was examined by his Personal Physician and an E.N.T Specialist in Abuja and was treated. Both Nigerian doctors recommended further evaluation purely as a precaution.”Two days later, News Express, exclusively reported that the president had been diagnosed with cancer in the UK. The paper reported:
A source told News Express this morning, “President Buhari went for check-up hours after he arrived in London. The hospital has discovered the cause of Mr President’s illness to be cancer of the ear and brain. Let us start praying.”
The source, who is well connected in government circles, gave the name of the hospital as Royal Hospital London. He said he was given the information by medical sources at the hospital who have been his longtime friends.
On June 10,, 2016, The Trent reported that President Buhari has been advised by his doctors to undergo surgery to remove the cancerous growth, a presidency source confirms to The Trent.
Our report confirmed the cancer diagnosis and that the he was ignoring the advise of his doctors to operate and remove the growth. Our report said:
According to the reliable source, Buhari has, indeed, been diagnosed with cancer and the cancer is “growing but not spreading” and doctors have recommended immediate surgery to remove the growth. But Buhari is hesitant to undergo the treatment because he would take 6 months to recuperate, during which time, he would be away from the office.
“Yes, the president has cancer. The doctors found cancer confined in the tissue mass in his prostrate. It’s in the cells. It is growing, but not spreading,” the source disclosed to The Trent, on condition of anonymity because of the sensitivity of the matter.
“The UK specialists say that considering Baba’s [Buhari’s] age, there’s a high chance that it will start spreading if it is not removed. But Baba is reluctant because it will mean that he will be away from work for six months,” the source revealed. “So, the president is waiting and watching and hoping that it doesn’t spread. If it begins spreading, he would have no choice but to operate.”
“The doctors have told him that stress will speed up the growth rate, so Garba and Adesina are working on a strategy to shield the president from citizen criticism and negative news reports. But it is not easy.”
According to another inside source, the president has directed his media aides to remain mute on the cancer report because it “will just be a distraction”.
Source – The Trent