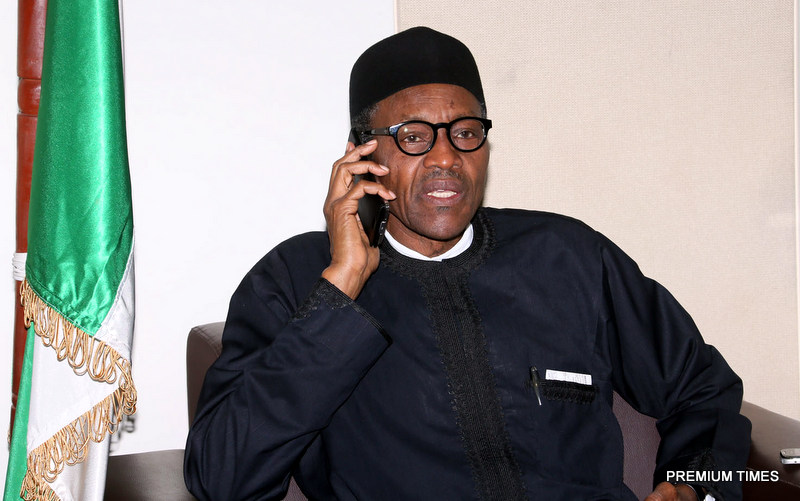 The White House Press Secretary, Sean Spicer, on a live press briefing confirms that President Donald Trump had phone calls with  leaders of three African countries, including Nigeria, South Africa, and Tunisia.
Sean Spicer in his press briefing confirms before the White House press corp that President Donald Trump had phone calls with leaders of Tunisia, Peru, Nigeria, Columbia, and South Africa.
There has been several media speculations about Trump not making that important phone call to Buhari, though the briefing did not confirm whether it was between the Acting President Prof. Yemi Osinbajo or with President Muhammadu Buhari, who is in London, UK receiving medical treatment.
But the confirmation by the White House Press Secretary that there was a phone call between Trump and the leader of Nigeria among other world leaders has led to rest all the media speculations that such phone calls did not take place.

Sean Spicer also said the read out, which is the details of discussions of the phone call will be available shortly. That would bring to the fore the content of their phone discussion.
However, the White House’s website page for press statements where the readout of President Trump’s phone calls with foreign leaders are published has no update on the said interaction with President Buhari.
What’s more, the website is updated regularly, sometimes in real-time. For instance, the announcement of the opening of the White House visitors office was promptly put on the website after US First Lady Melania Trump made the announcement.
Also, Monday, Trump’s diplomatic meetings and engagements which including receiving the Canadian Prime Minister Justin Trudeau were promptly uploaded on the website on Monday.

International and local media reported on Monday, February 13, 2017 that ailing President Muhammadu Buhari spoke with America’s President Donald Trump by telephone at the request of the US President.
The source for all the stories is a statement issued by Femi Adesina, a spokesperson to President Buhari, who is on medical leave in London.
According to Adesina, the conversation between the two presidents was cordial and Buhari congratulated Trump on his election as president of the United States and on his cabinet.
Adesina said the two leaders discussed ways to improve cooperation in the fight against terrorism through provision of necessary equipment.
According to him, Trump encouraged  Buhari to keep up the good work he is doing, and also commended him for the efforts he has made in rescuing 24 of the Chibok Girls and the strides being taken by the Nigerian military.
“Trump assured the Nigerian president of the U.S readiness to cut a new deal in helping Nigeria in terms of military weapons to combat terrorism.
“Trump also invited Buhari to Washington at a mutually convenient date,’’ the statement concluded.

Intersociety, a democracy protection advocacy institution, has released a statement expressing fears that the Nigerian presidency may have fallen victim to a scam artist or is willfully extending its reign of “presidential falsehood beyond the borders of Nigeria”.
“Of all the trending and unfolding dramas associated with the whereabouts and true health status of President Muhammadu Buhari, the latest as captioned above is gravely disturbing and diplomatically weighty; capable of causing serious diplomatic rows between Nigeria and the new Donald Trump administration in Washington; if found to be an extension of trending presidential falsehood or virus in Nigeria,” the organisation said.
“Criminologically, diplomatically and circumstantially speaking, the statement [by Femi Adesina] may most likely have been presidentially corrupted and made an extension of trending presidential falsehood in Nigeria and expanded into presidential falsehood across borders. The referenced statements are also grossly one-sided, circumstantially untenable, diplomatically blundered and grossly un-Trump-like.
Circumstances may most likely not have been ripe for new President Donald Trump to say those things Deacon Femi Adesina credited to him. Most importantly and strikingly, the statements under reference are monolithic in source; having only come from the mouth of Mr. Femi Adesina, who is co-enmeshed in trending presidential falsehood and associated dramas in Nigeria concerning the true whereabouts and health status of President Muhammadu Buhari who has gone missing in office since late January 2017.
“Funny enough, the same Mr. Femi Adesina that barely knows where his boss is or visits or joins him wherever he is, has suddenly appeared in the presence of his boss to record what he discussed with President Donald Trump,” the statement co-signed by the organisation’s board chairman, Emeka Umeagbalasi, said.
Additional reports by The Republican News.