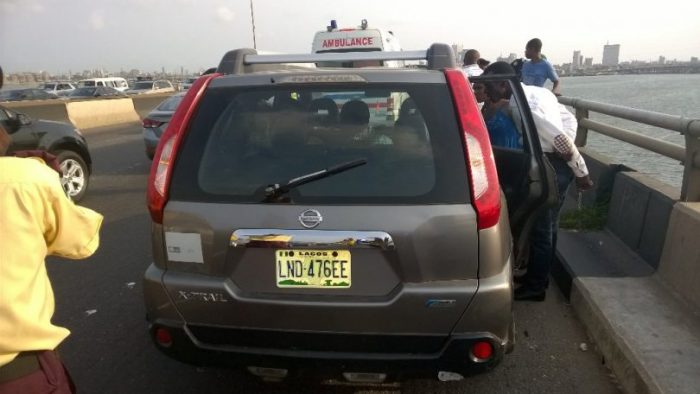 The scene of a suicide on 3rd Mainland Bridge, Sun, March 19, 207
There was a traffic slow-down on 3rd Mainland Bridge in Lagos when a man ordered his driver to stop his SUV mid-way through the bridge, alighted from the vehicle, and jumped off the bridge.
This sad event occurred at about 5pm on Sunday, March 19, 2017.  When ParrotsNG correspondent arrived the scene by 5.30pm, there was a large traffic build-up and slow-down before the scene of the incident. First responders, police and LASTMA officials were at the scene with their vans.
A statement issued by the Lagos State Transport Management Agency, LASTMA, identified the victim as a medical doctor by name Orji.

REPORT Of A Suicide On 3rd Mainland Bridge. A Man Just Leaped From The Bridge Into The Lagoon. #Lagos #Nigeria

“The agency [LASTMA] received a distress call  of a man who  parked his  grey coloured Nissan SUV with registration number LND 476 EE  at about 4.50 pm today Sunday, 19th March 2017 around Adekunle, inward 3rd Mainland bridge and jumped into the Lagos Lagoon,” the statement said.
“Preliminary investigation at the scene revealed that  the man said to be medical doctor named Orji who was said to be driven by his driver and suddenly ordered the driver to pull over, dropped  from the car and suddenly jumped into the water from the bridge.
“The vehicle and the driver has been taken to Adeniji Adele Poice Station for further investigation, while effort is on going to recover his body from the Lagoon.
“The General Manager LASEMA Mr Adesina Tiamiyu said that proper investigation would be conducted on the incident by the appropriate authorities,” the statement ended.