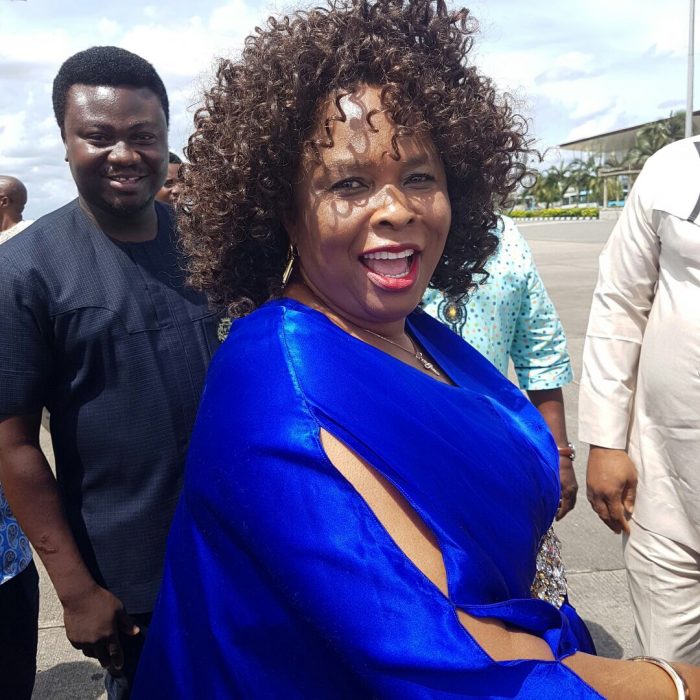 Dame Patience Jonathan pictured at Port Harcourt International Airport on Sunday, October 2, 2016 | The Trent
Patience Jonathan, wife of former President Goodluck Jonathan, on Monday, April 10, 2017 withdrew money from her Skye Bank account which had been unfrozen by the courts after
Dame Jonathan arrived at the Maitama, Abuja Branch of the bank in the company of some aides, sources told TheCable.
The source did not say the exact amount that she took out of her account.
Jonathan’s visit to the bank is coming a few days after a federal high court in Lagos ordered the de-freezing of her account containing $5.8m.
The order of the court was sequel to an application argued by Adedayo Adedipe, counsel to the former first lady.
Adedipe had urged the court to unfreeze the account on the grounds that Jonathan was not a party in the suit leading to the order made by the court.
Adedipe while citing judicial authorities contended that the order was an abuse of court process as the court had no jurisdiction to make an order against a party that is not a party in a suit filed before the court.
The Economic and Financial Crimes Commission, EFCC, which initiated the suit leading to the order made by the court freezing the account did not file any response to the application filed to discharge the order.
Mojisola Olatoregun, the judge, upheld the submission of Adedipe and then discharged the order freezing the account.
Sometime last year, based on an application filed before the court by the EFCC, the court had ordered that the account be frozen on the grounds that it contained suspected proceeds of crime.
The article originally appeared on TheCable.