Home Breaking News EXCLUSIVE: It’s Fraudulent For An Individual To Take Credit For Any President’s... 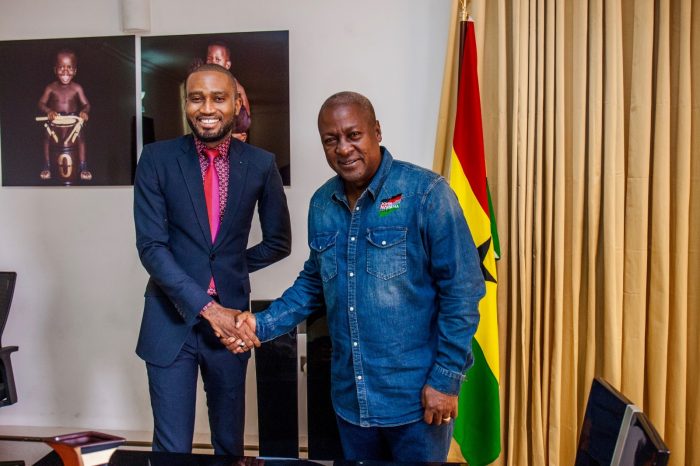 Mr. Fix Nigeria, Ohimai Amaize pictured with President John Mahama during the 2016 Ghana presidential election campaigns | Photo courtesy of Mr. Fix Nigeria
Popularly known as Mr. Fix Nigeria, Ohimai Godwin Amaize is a Nigerian media personality, political strategist and publisher. He served in the Nigerian government from 2011-2015 as a ministerial aide at Nigeria’s ministries of youth development, sports, defence and foreign affairs. He worked as a new media strategist on the re-election campaign of Ghana’s former President John Mahama. In this exclusive interview with, Ephraim Adiele, The Trent’s Associate Editor, he bares his mind on the Ghana presidential elections, Nigerian youths in politics and governance amongst other issues.
You are currently on a tour of the University of Boston, the Massachusetts Institute of Technology, MIT, and Harvard University on the entourage of Ghana’s former President, John Dramani Mahama. What can you tell us about these engagements?
Well, our work as journalists is to cover important and newsworthy events happening across the globe. Also, if you followed closely the 2016 presidential elections in Ghana, you would have noticed my involvement as Coordinator of the Ghana At Work project which was essentially devoted to archiving and showcasing the developmental achievements of President John Mahama while he was in office. He did not win his re-election campaign for a second term but a lot of the work he did as President of Ghana has become a model to many developing countries across the world especially in Africa. He has attracted so much international goodwill since he left office and he is increasingly one of the world’s most sought after speakers on good governance today with diverse speaking engagements across the globe, the most recent being the ones at Harvard, Boston University and the Chicago Council Global Food Security Symposium in Washington DC.
You have been described as the first Nigerian youth to be a foreign President’s New Media Consultant through your Ghana at Work project. This came five years after you set a record as the world’s youngest presidential campaign manager ever during the 2011 presidential elections in Nigeria. How was this experience in Ghana?
It was an interesting experience. Of course, political campaigns are not entirely new to me and just as you recalled, in 2011, I was a presidential campaign manager in Nigeria at the age of 26. But working in Ghana unpacked new experiences. I had practically relocated from Nigeria, left my family in Abuja and was in Ghana for six months working on diverse components of the campaign. We developed a series of new media campaigns, we shot videos, we visited project sites and organized events showcasing the development strides of President Mahama and we travelled to all the 10 regions of Ghana. All of them! Sometimes, we travelled on the President’s campaign trail but for the most part, my project team and I were travelling on our own. My time in Ghana revealed a lot about the similarities and divergences between Ghana and Nigeria. Despite some of the opposition and hostility we encountered, I can say that Ghanaians are a largely peaceful people and the tension and violence you witness during Nigerian elections was absent during the Ghanaian elections. But one thing we share in common is the creative spirit of young people. And I think it’s an African thing. Young Africans, everywhere you find them are at the forefront of innovation, creativity and enterprise.