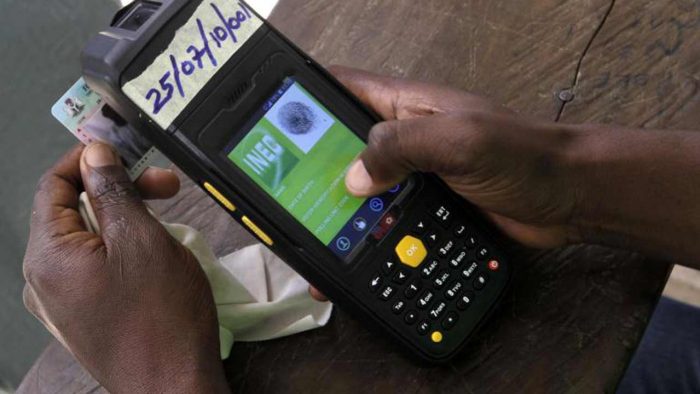 A file photo of an INEC cardreader
The Independent National Electoral Commission, INEC, says it will commence a continuous voter registration on April 27 across the 774 local councils  of the federation.
The commission disclosed this in a statement signed by Mrs. Amina Zakari, INEC National Commissioner, after a meeting with resident electoral commissioners (RECS) and administrative secretaries from the 36 states and the Federal Capital Territory.
INEC said  that the exercise would take place from 9am to 3pm on weekdays (Mondays to Fridays), excluding public holidays.
The registration centres, according to the statement, shall be the local government offices of the commission or such other suitable locations as would be made public by the State Offices of lNEC.
It stated that the decision was taken at the meeting following INEC consultations with stakeholders including political parties, civil society organisations and the media.
“ The exercise is intended to enable citizens who have turned 18 years of age since the last registration as well as those who did not register during the last exercise to register as voters.
“It will allow those seeking transfer of their registration from one State to another or within a State from polling unit to another to do so.
“The exercise also intends to enable the distribution of uncollected Permanent Voter Cards (PVCs) to those who could not collect them before or since the last general elections.
“It will also enable citizens who have the Temporary Voter Cards (TVCs) but whose names are on the register to collect their PVCs,’’ it said.
However, the commission advised those who were already registered not to do so again as it is an offence to register more than once.
“The commission wishes to reiterate its commitment to consolidating our democracy.
`This we are going to do by ensuring that citizens are given the opportunity to register as voters on a continuous basis as enshrined in the Electoral Act 2010 (as amended) well before elections.’’
It therefore appealed to all citizens to cooperate with the commission to ensure the success of the exercise.
The INEC Chairman, Prof. Mahmood Yakubu, had earlier said the registration  would  be a routine exercise once it commences.