Home Breaking News MENINGITIS | Don’t Pay For The Vaccines, They Are Free – FG 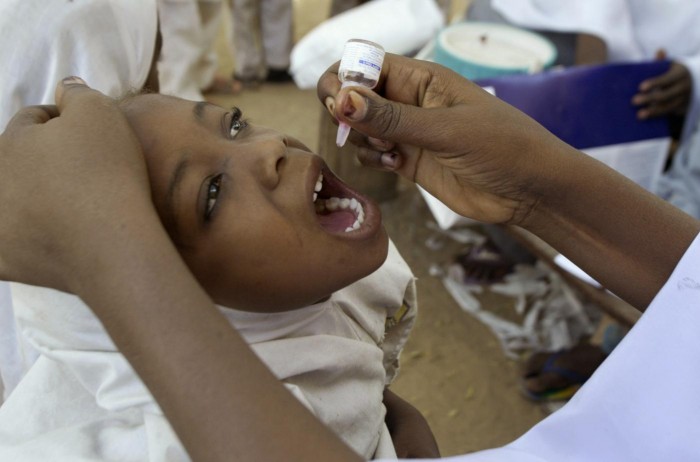 A child receiving a vaccination
The federal government says vaccination for meningitis is free throughout the country and asked Nigerians not to pay for it.
Faisal Shuaib, executive director, National Primary Healthcare Development Agency, NPHCDA, said this in a statement made available to reporters on Friday, April 7, 2017.
Shuaib, therefore, advised Nigerians to report any health center or health worker who extorts money for the on-going meningitis immunisation.
He said the attention of the agency had been drawn to a report of sharp practices by some health workers and civil society organizations (CSOs).
Shuaib added that some health workers were alleged to have extorted money and other forms of incentives from members of the public before being vaccinated against Cerebro Spinal Meningitis (CSM).
“The federal government had spent billions of naira to procure, store, maintain and distribute such vaccines to all parts of the country,” he said.
“Under no circumstances should any health worker demand for money from members of the public for such services.”
According to him, the vaccines’ preventable diseases are covered free-of-charge under the National Immunisation schedule, which includes Bacillus Calmette Guerin (BCG), Poliomyelitis and Hepatitis B.
Others are Diphtheria, Pertussis and Tetanus toxoid (Pentavalent vaccines), Haemophilus influenza type B, Pneumococcal vaccines, Inactivated Polio virus vaccines, Measles, Yellow Fever and of course, Meningitis vaccines.
Residents of Kubwa in Abuja had alleged that they were being charged N500 per person before receiving the CSM vaccine.

The federal government says it has deployed epidemiologists and vaccines to arrest the outbreak of a new a strain of Cerebro Spinal Meningitis, CSM, in parts of the country.
The minister of health, Isaac Adewole said this on Thursday, March 16, 2017 in Abuja that the new strain, which is not common in Nigeria, was imported from Niger Republic.
Adewole said that the new strain requires a different type of vaccine and a team of epidemiologists have been deployed to address the challenge.
He described the outbreak of meningitis in Sokoto and Zamfara states as an unfortunate incidence, stressing that the ministry is working hard to contain the situation.
“It has become an annual ritual under this administration; we would want to put an end to annual outbreak of meningitis in some of the northern states.
“I have just spoken with the commissioner for health in Zamfara who is appreciative of what the Federal Ministry of Health has been doing through the Nigeria Centre for Disease Control.
“We have sent field epidemiologists; they are actually called disease detectives, to support them at the state level,’’ Adewole said.
The minister said that government have provided vaccines and would continue to do more in terms of whatever was needed with respect to material and technical support to overcome the outbreak.
“What we know in public health is that there is always an outbreak, but what is uncertain is where and the type.
“We want to be ready at any time,’’ he said.
Additional reports by NAN