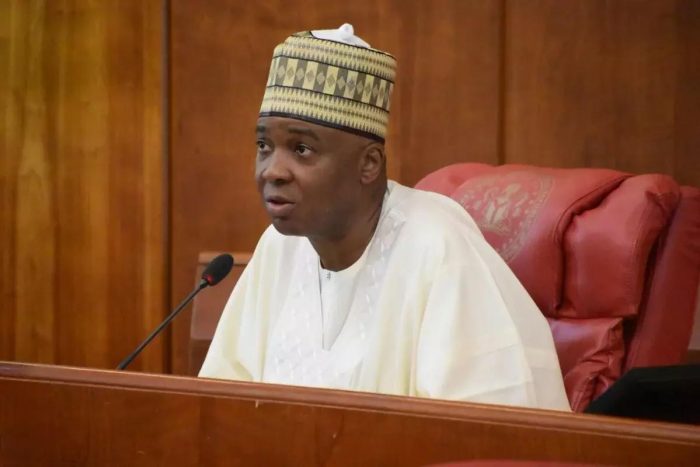 Senate President Bukola Saraki
Senate President Bukola Saraki  has asked the Economic and Financial Crimes Commission, EFCC, to reveal the identity of the owner of the monies – $43m, £27,000 and N23m – that it discovered in a flat at a luxury building in Lagos.
Operatives of the anti-graft discovered the monies at flat 7B, on 16 Osborne road, Ikoyi, Lagos, on April 12. But the identity of the owner was not revealed.
The National Intelligence Agency (NIA) claimed ownership of the funds, just as the Rivers state government did.
This has caused a controversy to ripple without the EFCC disclosing any owner, 13 days after its discovery.
However, a federal high court in Lagos gave an interim order for the forfeiture of the funds, and scheduled May 5 for the owner to appear before it.
In an interview with Arise TV, Saraki described the issue as a “circus” which must stop.
“I believe this is something simple that the organisation (EFCC) should manage, even before the speculation started coming out. The circus has to come to end as to whether it belongs to individuals, companies, agencies or a state government,” he said.
“We, however, believe they will sort it out and eventually tell Nigerians who owns the money. Nigerians deserve to know. The circus must stop.”‎
He also urged Nigerians to take the fight against corruption personally.
“I believe progress will be made faster if the process is transparent. Those are ways to strengthen institutions. When the process is transparent up to the investigative stage, people will not believe that it is because of this person that so, so, person is being prosecuted,” he said.
“Corrupt people are very patient, but with a transparent process, the fight against corruption will be won.
“On our part, we are doing all it takes to strengthen institutions. We have four bills before us, one is with the constitution amendment committee, and one has been taken back by the executive.”
Read more at TheCable.