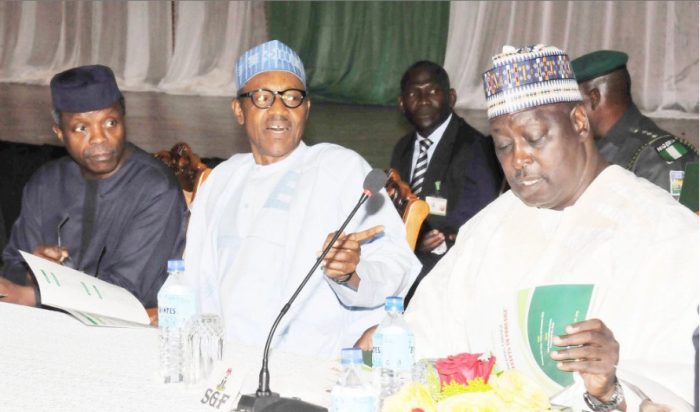 President Muhammadu Buhari between Vice Professor Yemi Osinbajo the Secretary to the Federal Government , Babachir David Lawal | NAN Photo
Babachir Lawal, secretary to the government of the federation, has told reporters to ask the “presidency” why he was suspended.
In an encounter with reporters on Wednesday, April 19, 2017 shortly after his suspension was announced, a clearly shocked Lawal stalled on all the questions he was asked.
Informed that his suspension was announced by the presidency, he retorted: “Who is the presidency?”
He had been in a meeting with vice president when Femi Adesina, presidential spokesman, announced his suspension pending investigations into the the award of contracts under the Presidential Initiative on the North East (PINE).
Also suspended is Ayo Oke, director-general of the National Intelligence Agency (NIA), over the funds recovered from a private residence in Ikoyi, Lagos state, by the Economic and Financial Crimes Commission (EFCC).

THE EXCHANGE IN FULL

Reporters: Your suspension has just been announced. How will you react to the development?
Lawal: Who announced it?
Reporters: The presidency
Lawal: Then ask them. Why are you asking me? Who is the presidency?
Reporters: Have you been informed of the suspension?
Lawal: By who? About what. What about you? Have you been informed?
Reporters: Yes sir.
Lawal: By who?
Reporters: By the presidency sir.
Lawal: I have not seen it. I should have been given… I have not seen the press release so I cannot comment on it.
Reporters: It is currently trending online. Are you doubting the authenticity of the statement?
Lawal: I have not seen it.
Reporters: Tell us the outcome of your meeting with the vice-president.
Lawal: I am always here. I always meet the vice-president. I used to come here even before I was made SGF.
Read more at TheCable.