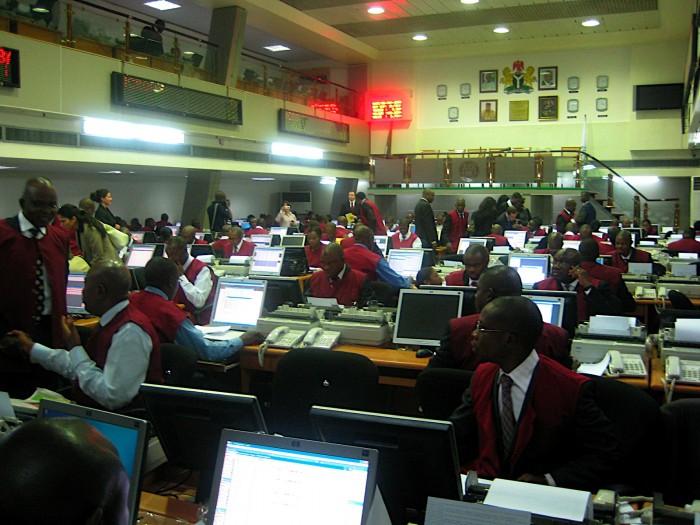 File: The floor of the Nigerian Stock Exchange

Nigerian stocks have bounced back even as foreigners remain cautious. For the third day running, the stock market has been vibrant as local pounce on the end of the Naira peg. When the Naira peg ended, the stock market shot up by 8%, causing excitement among the locals. Foreign investors, on the other hand, are still waiting for the local currency to weaken further.

The Nigerian Stock Exchange All Share Index made a 3.1% leap to hit 31,071.25 in Lagos, the country’s major commercial hub. This increase is the highest since September 30, 2016. A report by Bloomberg shows that the benchmark rose by 8%, the highest among other 94 major equity indexes. The Naira; however, had initially fallen by 30% when it floated freely. It further dropped 0.5% to 284 against the dollar.

The switch from the bond market

The volume in the equity market has increased from $8 million to more than $20 million. According to Chris Becker, an analyst based in Johannesburg, this increase is not all about foreign currency steaming in, but a result of local currency being switched to stock from the bond markets. To capitalise on this trend, Godwin Emefiele, the Governor of the Central Bank of Nigeria, has announced that the Naira would trade without any restrictions in the coming weeks. He has effectively lifted the sixteen-month 197 – 199 rate against the greenback.

Easing past the little liquidity challenge

There are still a few transactions, Becker states, in the foreign exchange market and CMC Markets can venture in and do business. To clear a backlog of the demand for hard currency, the monetary authority has sold$4 billion on the spot. As much as $100 million can be transacted in a single day. The challenge of little liquidity has been bedeviling the foreign exchange market in Nigeria, and the Nigerian authorities needed to take urgent measures to correct the situation. It even seemed as if the exchange rates were not at par with the market-clearing level.

Following the recent developments, stakeholders are already charting the way forward for the next 12 months. Apart from the CBN, not many other foreign investors are willing to supplying enough foreign currency, suggesting the local currency may need to weaken further. However, it is hoped that it will fall to around 300 in the coming year. Mostly, things are looking bright for the Nigeria Stock Exchange.

The banking index in Nigeria increased by 2.3%, the best close since October 23, 2016. It is an indication of a vibrant stock market, and investors have nothing to fear. Already, some companies are reaping big. GlaxoSmithKline Consumer Nigeria is leading in capital gains, having advanced 10%. Despite previous concerns, the international community can venture into the West African country, and conduct trade in stocks.

Nevertheless, foreign investors aren’t coming back according to the head of currency trading, Ecobank Transnational Inc. He attributes the current situation to the fact that they want to take strategic positions. He further notes that the cautiousness adopted by foreigners has more to do with Naira stability than the level of the local currency. Currently, the available liquidity may not be enough for international business. However, it is sufficient for small trades that are a characteristic of the local economy.

The effect of the credit crunch

Not many economies have recovered from the devastating credit crunch that hit the world in 2007. Nigeria, like many other Africans, has been slow to bounce back. However, recent developments have pointed to a bright future. Although foreign investors have been cautious, they are soon joining the fray as they are waiting for the local currency to stabilise before making any move. The current liquidity may also not allow them to venture into stock trading, but the Nigerian authorities are working to ease the problem of insufficient liquidity.
Although foreign investors remain cautious, the Nigerian Stock Exchange is rapidly bouncing back after a slump during the Easter holiday. The naira has gone down, and it is expected to weaken even further as it becomes more stable. It may not take long before the foreigners stream in and start trading stocks. Primarily, Nigeria is set for greater times to come.