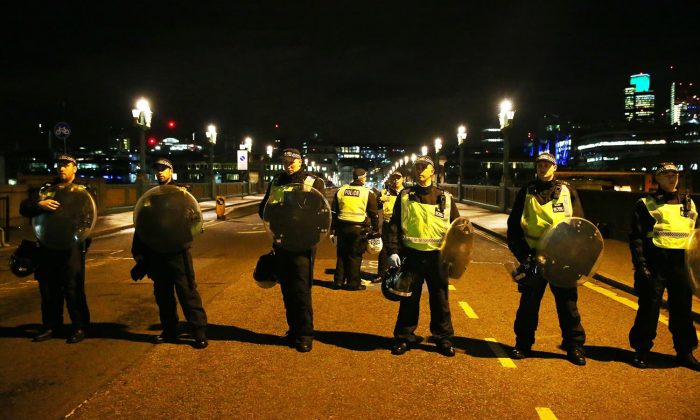 Police officers guard the approach to Southwark Bridge after an incident near London Bridge in London, Britain June 4, 2017. | Reuters/Neil Hall
At least nine people have now been confirmed killed and at least 48 injured in a terror incident in London in which three male attackers were also shot dead by police.
A white van hit pedestrians on London Bridge at about 22:00 BST on Saturday, June 3, 2017 before three men got out and stabbed people in nearby Borough Market.
Armed officers shot the suspects within eight minutes of the first call.
The injured were taken to five hospitals. More than 80 medics were sent to the scene.
One of the injured is an officer from British Transport Police who was stabbed after responding to the incident. His condition is serious, but not life-threatening.
A bomb disposal team was called to Borough Market and local residents told to leave their homes.
Commissioner Mark Rowley said: “The suspects were wearing what looked like explosive vests but these were later established to be hoaxes.”
He said it was currently believed there were only three attackers involved.
“We are treating this as a terrorist incident and a full investigation is already under way,” he added.
The incident is the third terror attack in the UK in three months following the car and knife attack in Westminster in March, which left five people dead, and the Manchester bombing less than two weeks ago, in which 22 people were killed.
Prime Minister Theresa May described Saturday night’s as “dreadful” and will chair a meeting of the government’s Cobra emergency committee later.

We cannot and must not pretend that things can continue as they are. Things need to change, and they need to change in four important ways. pic.twitter.com/szq25idIC7
— Theresa May (@theresa_may) June 4, 2017

London Mayor Sadiq Khan called it “a deliberate and cowardly attack on innocent Londoners”.
BBC reporter Holly Jones, who was on the bridge at the time of the attack, said the van was “probably travelling at about 50 miles an hour”.
Culled from NAN.