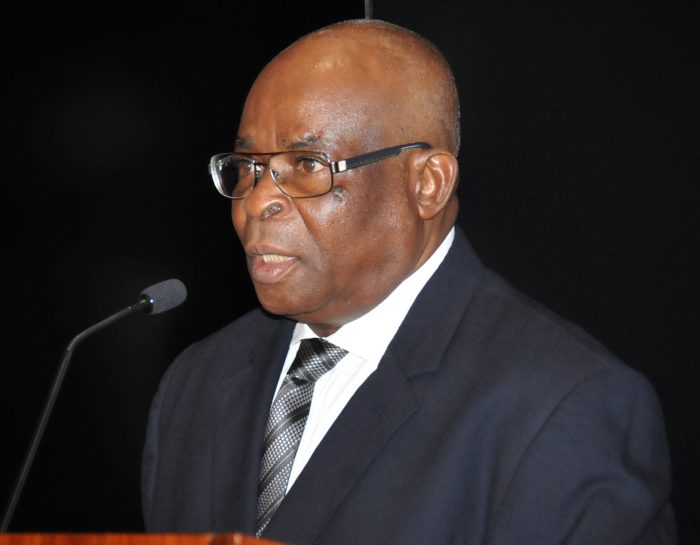 Walter Onnoghen, Chief Justice of Nigeria | NAN Photo
The National Judicial Council, NJC, has recalled Justice Inyang Okoro of the Supreme Court who was suspended with seven other justices in November 2016.
In a statement issued in Abuja on Saturday, June 3, 2017 by the council’s director of information, Soji Oye, said the council also recalled Justice Uwani John of the Court of Appeal, Justice Adeniyi Ademola, Justice Hydiazira Nganjiwa and Justice Musa Kurya of the Federal High Court.
Okoro and seven other judges were suspended after a raid on their homes by the State Security Service.
Justice Agbadu Fishim of National Industrial Court of Nigeria also benefited from the council’s decision.
Only three of the affected judges have been charged to court, but only Ademola’s case has been concluded and he was discharged and acquitted.
Oye said the decisions were taken at the NJC’s 82nd meeting held on May 31 and June 1 presided over by the Chief Justice of Nigeria, Justice Walter Onnoghen.
You may read the full press statement below:
The National Judicial Council, under the chairmanship of Hon. Justice Walter. S. N. Onnoghen, GCON, at its 82nd Meeting which was held on 31st May and 1st June, 2017, considered the case of eight Judicial Officers who were directed to recuse themselves from duties on the request of the Attorney-General of the Federation pending the outcome of investigations against them. To maintain the integrity and sanctity of the Judiciary and sustain public confidence, the Judicial Officers were directed to recuse themselves from office with effect from 2nd November, 2016.
After deliberation, Council noted that out of the Judicial Officers directed to recuse themselves from performing their official duties, only three have been charged to Court. They are:-
• Hon. Justice N. S. Ngwuta, CFR, of the Supreme Court of Nigeria;
• Hon. Justice A. F. A. Ademola of the Federal High Court; and
• Hon. Justice Rita Ofili-Ajumogobia of the Federal High Court.
The trial of Hon. Justice A. F. A. Ademola has been concluded and he has been discharged and acquitted of the charges filed against him.
In view of the foregoing, Council decided that the various Heads of Court should direct the following Judicial Officers to resume their judicial duties with effect from Wednesday 7th June, 2017, as there are already backlog of cases in their various Court for the past eight months:
1. Hon. Justice John Inyang Okoro of the Supreme Court;
2. Hon. Justice Uwani Abba Aji of the Court of Appeal;
3. Hon. Justice Hydiazira A. Nganjiwa of the Federal High Court;
4. Hon. Justice A. F. A. Ademola of the Federal High Court who has been discharged and acquitted;
5. Hon. Justice Musa H. Kurya of the Federal High Court; and
6. Hon. Justice Agbadu James Fishim of National Industrial Court of Nigeria.
Council also at the Meeting, decided to warn Hon. Justice M. N. Esowe of the National Industrial Court of Nigeria, Hon. Justice Adolphus Enebeli of the High Court of Justice, Rivers State and Hon. Justice Bassey Frank Etuk of the Akwa-Ibom State High Court for different offences and place two of them on the “Watch List” of the Council.
Council’s decision to give Hon. Justice Esowe a serious warning and put her on its “Watch List” for one year, was sequel to a petition written against her by Mr. Jimmy Dirisu Aliu, alleging injustice for failing to deliver ruling in Suit No. NICN/ABJ/394/2013, until Eight (8) months after the final address of counsel on Notice of Preliminary objection to his Suit.
Council also decided to give Hon. Justice Adolphus Enebeli serious warning and place him on its “Watch-List” for three years following its ‘findings’ that Hon. Justice Enebeli violated the Code of Conduct for Judicial Officers of the Federal Republic of Nigeria by granting ex-parte order in Suit No. PHC/983/2016, preventing the swearing-in of Victoria Wodo Nyeche as a member of the Rivers State House of Assembly, when the claim in the Suit did not border on qualification or pre-election matter. The Hon. Judge was said to have granted the ex-parte order on 19th April, 2016, three days to the swearing-in ceremony and adjourned the case to 21st April, 2016 when the ceremony had been concluded.
Hon. Justice Bassey Frank Etuk was warned following a petition written against him by Oro Youth Movement for failure to deliver judgment in Suit No. HOR/FHC/97/2014, a Fundamental Human Right case, after hearing it to conclusion and adjourned same for judgment to the 8th June, 2015. The Hon. Judge then proceeded on National assignment as an Election Petition Tribunal member and did not deliver the judgment even after his return in November, 2015, when he transferred the case file to the Chief Judge for it to start de-novo.
The Suit was filed by two officers of the Movement to prevent the police from arresting them after they were reported for embezzling the sum of N20, 000.000.00 (Twenty Million Naira) from the account of the movement.
The decision of the Council is with immediate effect.
Council also considered and dismissed petitions written against twelve other Judicial Officers.
Council dismissed the petitions because three (3) of the Petitioners withdrew their petitions against Hon. Justice T. U. Uzokwe, Chief Judge, Abia State, Hon. Justice Okoroafor of the Abia State High Court and Hon. Justice Judge Okeke of the FCT High Court of Justice.
One petition written against Hon. H. A. Nganjiwa of the Federal High Court was also dismissed for subjudice.
Other petitions written against Hon. Justices Adamu Abdu-Kafarati and O. E. Abang, both of the Federal High Court, Hon. Justices Mobolaji Ojo, and E. O. Osinuga, both of the Ogun State High Court, Hon. Justice B. A. Oke-Lawal of Lagos State High Court, Hon. Justice A. A. Aderemi of Oyo State, Ntong F. Ntong of Akwa-Ibom State High Court and the second petition written against Hon. Justice Bassey Frank Etuk of Akwa-Ibom State High Court of Justice were found unmeritorious.
Soji Oye, Esq
Director, Information
Culled from TheTrent