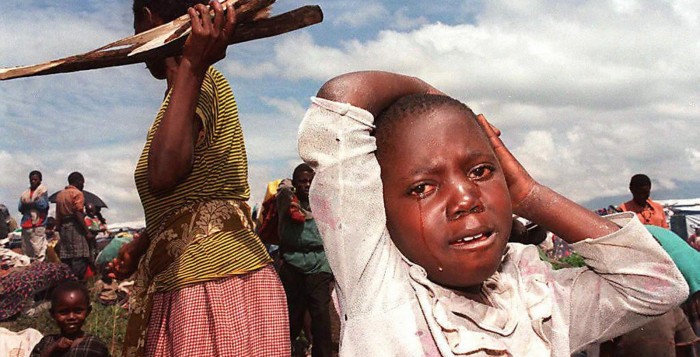 (FILES) This picture taken on November 16, 1996 shows a lost Rwandan girl crying at the Gisenyi refugee aid camp. | AFP/Abdelhak Senna/Getty Images
Northern Youths’ Genocidal Threat: Avoiding The Repetition Of 1966 Anti Igbo Pogrom In Northern Nigeria And 1994 Rwandan Genocide
The present Federal Government of Nigeria and its security forces as well as all elected and appointed public office holders and other key political actors in Southeast Nigeria must proactively and preventively avoid the repetition of the 1966 anti Igbo pogrom in Northern Nigeria in 1966 in which “between 45,000 and 50,000 civilians of former Eastern Nigeria were killed in Northern Nigeria and other parts of Nigeria from May 1966 and December 1967”. The 45,000 to 50,000 citizens that were massacred are dominated by citizens of the Igbo Ethnic Nationality. The pre pogrom panics and its poorly managed early warnings further generated or forced 1.627,743 (one million, six hundred & twenty seven thousand, seven hundred and forty three) Easterners dominated by Igbo citizens residing in different parts of Nigeria to return home or become internally displaced persons. A good number of them crossed int’l borders and became refugees.
The pogrom started as “May Day Anti Igbo Riots in Northern Nigeria” in which over 3,000 Igbo dominated citizens were butchered. During the months long butcheries, Northern soldiers and civilians went into towns, fished out East­erners and flattened them either with rapid gunfire or with violent machete blows, leaving their prop­erties looted or torched. Accord­ing to the Massacre of Ndigbo in 1966: Report of the Justice G. C. M. Onyiuke Tribunal, [Tollbrook Limited, Ikeja, Lagos] “…between 45,000 and 50,000 civilians of for­mer Eastern Nigeria were killed in Northern Nigeria and other parts of Nigeria from 29th May 1966 to December 1967 and the Tribunal estimates that not less than 1,627,743 Easterners fled back to Eastern Nigeria as a result of the 1966 pogrom
It is further recalled that following the said May Day Anti Igbo Riots, resulting in massacring of over 3,000 mostly Igbo citizens, further warnings and notices of returned butcheries were issued by various violent non State actors in Northern Nigeria but these were unwarily ignored or kidded by then military and political leaders in Eastern Nigeria. The then Federal Military Government resorted to fire brigade approach, while military and political leaders in Northern Nigeria became State actor engineers, aiders and abettors of the returned butcheries and butchers; resulting to further year-long butcheries. The worst of it all was the lame duck and ineptitude dispositions of the then Eastern military and political leaders whereby despite the assurances given to then Igbo residents in Northern Nigeria not to panic or border to return home; a good number of those who heeded such “assurances of the graveyard” got entrapped and butchered in their thousands.
It is on account of the foregoing that we, the leaderships of Int’l Society for Civil Liberties & the Rule of Law (Intersociety) and Southeast Based Coalition of Human Rights Organizations (SBCHROs) resolved to call on the present Federal Government of Nigeria and its security forces as well as all elected and appointed public office holders and other key political actors in Southeast Nigeria not to repeat the dire mistakes of 1966 by taking for granted the recent anti Igbo exit order or ultimatum issued by a radical group of Northern Youths Coalition; comprising the Arewa Citizens Action for Change led by Nastura Ashir Sharif, Arewa Youth Consultative Forum led by Shetima Yerima, Arewa Youth Development Foundation led by Aminu Adam, Arewa Students Forum led by Alfred Solomon, Northern Youth Vanguard represented by Joshua Viashman and the Northern Emancipation Network led by Abdul-Azeez Suleiman who also read the text of the Coalition’s genocidal statement.
It is the common knowledge of all and sundry that the present security forces and agencies in Nigeria particularly their command structures are ethno-religiously lopsided and composed in grave favour of the Hausa-Fulani Muslims, which has widened the country’s citizens’ policing protection ratio and security, safety and protection disparity among the country’s six geopolitical zones. These explain our deeply worries concerning the likelihood of another anti Igbo pogrom in Northern Nigeria on account of the said genocidal threat. This is more so when up till now, the Nigeria security forces particularly the Army and SSS that go about hunting, haunting and hounding innocent Nigerians of non Hausa-Fulani Muslim stocks particularly those of South-south and Southeast, by killing, arresting, torturing and detaining them for months or more have not gone after those that issued the genocidal statement.
We hereby call on all members of the int’l community including intergovernmental and nongovernmental actors and international personalities to take int’l and diplomatic notices of the latest round of goings on in Nigeria with specific reference to the referenced genocidal threat and do that which is morally, legally and diplomatically necessary and expedient to compel Nigerian authorities and their security agencies not to resort to their usual lukewarm attitudes or fire brigade approaches in matters of this dicey nature. The int’l community and the present Government of Nigeria and the referenced Southeast political actors must see and treat the Northern Youths’ genocidal threat as early warnings that must be proactively and preventively handled so as to stop Nigeria and Nigerians from going the genocidal way of the Republic of Rwanda.
Signed:
For: Southeast Based Coalition of Human Rights Organizations (SBCHROs)
Comrade Aloysius Attah (+2348035090548)For: Civil Liberties Organization, Southeast Zone
Comrade Peter Onyegiri (+2347036892777)For: Centre for Human Rights & Peace Advocacy
Comrade Samuel Njoku (+2348039444628)For: Human Rights Organization of Nigeria
Engineer Rufus Duru (+2348037513519)For: Global Rights & Development International
Comrade Chike Umeh ( +2348064869601)For: Society Advocacy Watch Project
Obianuju Joy Igboeli, Esq. (+2348034186332)For: Anambra Human Rights Forum
Comrade Alex Olisa(+2348034090410)For: Southeast Good Governance Forum
Jerry Chukwuokoro, PhD (+2348035372962)For: International Solidarity for Peace & Human Rights Initiative
Tochukwu Ezeoke (+447748612933)For: Igbo Ekunie Initiative (Pan Igbo Rights Advocacy Group)
Comrade Vincent Ezekwume (+2348171793911)For: Civil Liberties Organization, Anambra State Branch
Emeka Umeagbalasi(+2348174090052)For: Int’l Society for Civil Liberties & the Rule of Law
Comrade Uzor Ugonna Kingsley (+2348138898669)For: Rural Engagement & Development Foundation(RED Foundation)