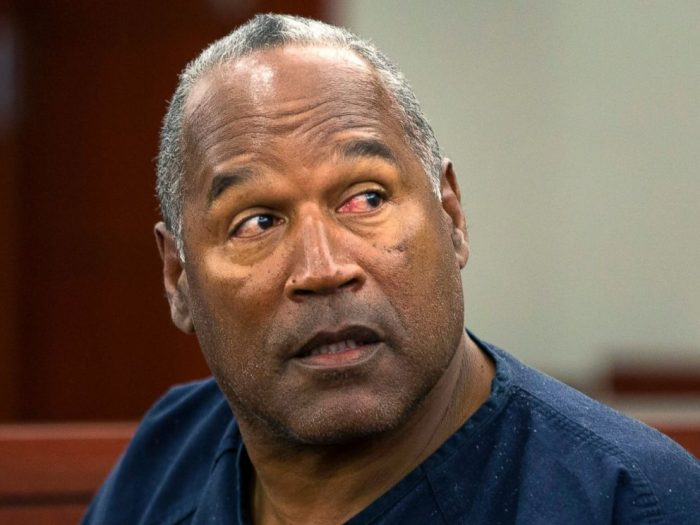 OJ Simpson pictured in court during burglary trial | Getty Images
O.J. Simpson was granted parole Thursday, clearing the way for the former football star and actor to be released from a Nevada prison as soon as Oct. 1.
Simpson, 70, will be a free man for the first time since 2007, when he was arrested for a Las Vegas robbery that led to his being sentenced to a minimum of nine years and a maximum of 33 years.
“I’ve done my time, I’d just like to get back to my family and friends, and believe it or not, I do have some real friends,” Simpson said. “Nine years away from my family, it just wasn’t worth it. I’m sorry.”
Simpson appeared on video conference from the Lovelock Correctional Center about 100 miles away from Carson City where the parole board convened.
He wore standard-issue blue jeans, light blue button-down shirt, white T-shirt and white sneakers and was seated next to his attorney Malcolm LaVergne. Simpson’s daughter Arnelle Simpson, sister Shirley Baker and close friend Tom Scotto were also in the room.
Connie Bisbee, chairman of the parole board, opened the hearing and said Simpson had been classified as “low risk” on the state’s risk assessment form.
The hearing lasted 75 minutes before a break. Bisbee and the three other members of the board returned and each cast their vote in favor of granting Simpson parole. Simpson bowed his head and said, “Thank you.”
As he left the room and headed back inside the prison, a heavy steel door closed behind him and Simpson clenched his hands and exclaimed: “Oh! God! Oh!”
Read more at USA Today.