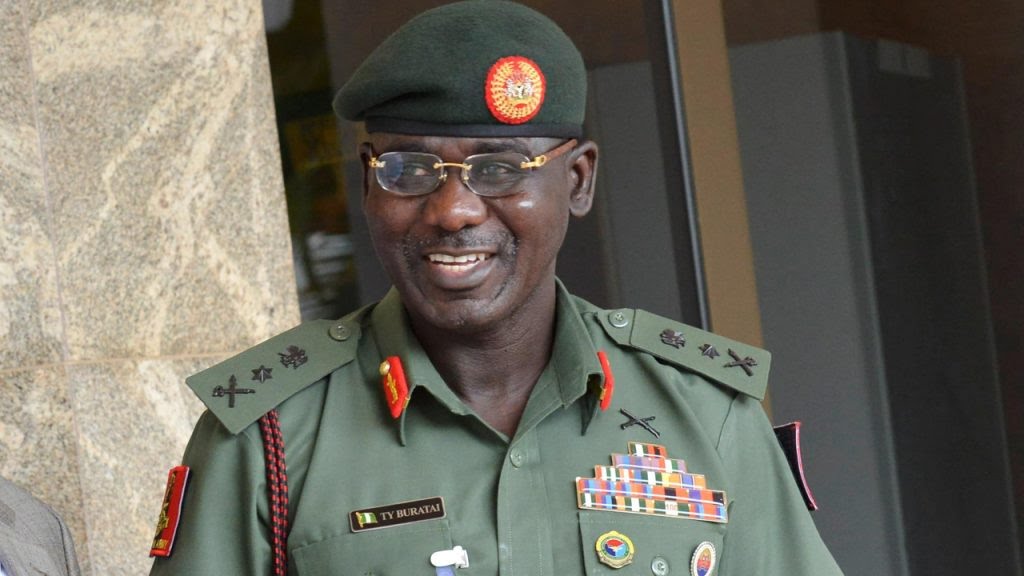 The Chief of Army Staff, Lt. General Tukur Buratai, on Monday evening, denied the reports that the military ever tagged the Indigenous People of Biafra, IPOB, a terrorist organisation.

He said rather, what the army did was to make a pronouncement on IPOB which, according to him, was not “a declaration per se.” He said what the federal government is doing regarding the group is the right thing.

Recall that few hours ago, the President of the Nigerian Senate, Dr. Abubakar Bukola Saraki had condemned the tagging of IPOB as terrorist organisation, saying it was unconstitutional.
Saraki had also faulted the South-East governors for proscribing the activities of IPOB in the region. Recall that army’s Director of Defence Information, Major General John Enenche, had pronounced that IPOB was a terrorist organisation after a reported clash between military personnel and IPOB members in Umuahia, Abia state.
Enenche had, during the pronouncement, given the following reasons for tagging IPOB a terrorist organisation; According to him, ““After due professional analysis and recent developments, it has become expedient to notify the general public that the claim by IPOB actors that the organisation is non-violent is not true.
“Hence, the need to bring to public awareness the true and current state of IPOB. “In this regard, some of their actions, clandestinely and actively, that have been terrorising the general public include: “The formation of a Biafra Secret Service, claimed formation of Biafra National Guard, unauthorised blocking of public access roads and extortion of money from innocent civilians at illegal road blocks.
“Militant possession and use of weapons (stones, molotov cocktails, machetes and broken bottles, among others) on a military patrol on Sept. 10, 2017. “Physical confrontation of troops by Nnamdi Kanu and other IPOB actors at a check point on Sept. 11, 2017 and also attempt to snatch their rifles.
“Attack by IPOB members on a military check point on Sept. 12, 2017, at Isialangwa, where one IPOB actor attempted to snatch a female soldier’s rifle.’’ “From the foregoing, the Armed Forces of Nigeria wish to confirm to the general public that IPOB from all intent, plan and purpose as analysed, is a militant terrorist organisation.”
However, Buratai said the army did not categorize IPOB as terrorist organisation but that the Defence Headquarters just made a pronouncement.
Buratai gave the statement while speaking during the official launch of Operation Python Dance II in Abakaliki. According to him, “You have to get it very clear. First of all, what the Defence Headquarters did was to make pronouncement. It wasn’t a declaration per se. But this has given room for the right step to be taken.
I think the government is doing the right thing. “It is not that we are overstepping our bounds. We are still within the limits.
And I ensure you that what the military said was to set the ball rolling and to bring the awareness to the public that this is what this organization is all about. I’m happy that the government has done the right thing right now.”
______________________________________________
Follow us on Twitter at @mediaparrotng
Copyright 2017 MEDIAPARROTNG. Permission to use portions of this article is granted provided appropriate credits are given to www.mediaparrotng.com and other relevant sources.