Home Breaking News FG And It's Agencies Begged Maina To Come Back And Assist In...

Share
Facebook
Twitter
Google+
Pinterest
WhatsApp
Family members of Abdulrasheed Maina, former chairman of Presidential Task Force on Pension Reforms, say their son is not a fraudster but a messiah who brought reforms into the pension scheme.
At a news conference in Kaduna on Wednesday, Aliyu Maina, spokesman of the family, accused a “cabal” of being behind the travails of the dismissed civil servant.
Aliyu wondered why government officials were denying his brother. He said it was the Department of State Services (DSS) that gave him protection for him.
“It is on record that Abdulrasheed Maina’s reform put to a stop the fraudulent withdrawal of huge sums from both the Nigerian Pension Board, the Nigerian Police Pension Board, etc. Perhaps it is his noble efforts that made him enviable to the present administration when they came into power to convince him to come back and assist in its ‘CHANGE’ agenda,” he said.
“Abdulrasheed was in fact invited by this administration and he was promised security to come and clean up the mess and generate more revenue to government by blocking leakages.
“He succumbed to the present administration and came back to Nigeria. He has been working with the DSS for quite some time and he was given necessary security.
“There is a letter from the attorney-general of the federation where he gave his own legal opinion regarding the court verdict which was submitted to the Civil Service Commission and the head of service respectively. So, one wonders why all the agencies and various individuals responsible for his return are now denying.”
Asked to comment on Maina’s whereabouts, Aliyu said: “As you know Abdulrasheed Maina had been a target of in the past, so experience is the best teacher. But when his security is guaranteed, he will surface from wherever he is and tell Nigerians the truth.”
Aliyu, who said the family had sought the intervention of its lawyers,  added that Maina would soon make some damning revelations.
“All the same, we have contacted our solicitors, Messrs Mamman Nasir & Co and instructed them to act appropriately. We equally know that Abdulrasheed Maina is in possession of so facts that are against the cabal and interesting to the Nigerian populace, which he will disclose soonest. One must ask whether it is an offence for somebody to serve his fatherland,” he said
He said the anti-graft agency had ordered the family members to vacate their residential house in Kaduna
The family said Maina inherited the houses which the Economic and Financial Crimes Commission (EFCC) recently seized in Kaduna.
_____________________________________
Follow us on Twitter at @mediaparrotng
Copyright 2017 MEDIAPARROTNG. Permission to use portions of this article is granted provided appropriate credits are given to www.mediaparrotng.com and other relevant sources
Share your story with us: SMS: +234705 2286737 Whatsapp:+234705 2286737 Email: mediaparrotng@gmail.com 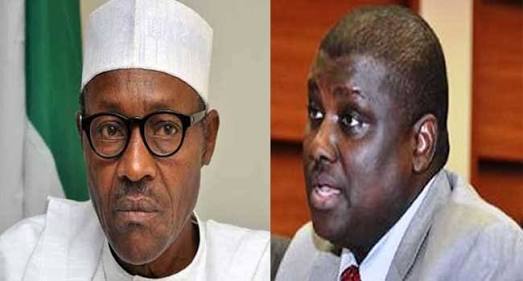