Home Breaking News Wild Jubilation On The Streets Of Zimbabwe As Robert Mugabe Resigns After...

Share
Facebook
Twitter
Google+
Pinterest
WhatsApp
Thousands have poured into the streets of Zimbabwe’s capital to celebrate after Robert Mugabe finally resigned as president.
Parliament’s speaker Jacob Mudenda said the 93-year-old resigned by letter on Tuesday, November 21, 2017 ending his 37 years in office, having been in power since independence in 1980.
Footage showed cars beeping and as people danced in Harare, waving flags and crying with joy.
Some people were holding posters of Zimbabwean army chief Constantino Chiwenga and former vice president Emmerson Mnangagwa, whose sacking this month triggered the military takeover that forced Mugabe to resign.

People and soldiers celebrate after the resignation of Zimbabwe’s president Robert Mugabe on November 21, 2017 in Harare.
Car horns blared and cheering crowds raced through the streets of the Zimbabwean capital Harare as news spread that President Robert Mugabe, 93, had resigned after 37 years in power. / AFP PHOTO / Marco Longari (Photo credit should read MARCO LONGARI/AFP/Getty Images)
“I am very happy with what has happened,” said Maria Sabawu, a supporter of the opposition Movement for Democratic Change (MDC), outside the hotel where the impeachment process was happening.
“I have suffered a lot at the hands of Mugabe’s government,” she said, showing her hand with a missing finger that she said she lost in violence during a presidential run-off election between Mugabe and opposition leader Morgan Tsvangirai in 2008.
Mugabe’s letter did not say who should succeed him but Mnangagwa will take over as leader within 48 hours, a ruling party official said.
The jubilation extended to Zimbabwe’s parliament, which had just begun an impeachment process that seemed to be the only legal way to force Mugabe out.

People and soldiers celebrate after the resignation of Zimbabwe’s president on November 21, 2017 in Harare.
Car horns blared and cheering crowds raced through the streets of the Zimbabwean capital Harare as news spread that President Robert Mugabe, 93, had resigned after 37 years in power. / AFP PHOTO / Marco Longari (Photo credit should read MARCO LONGARI/AFP/Getty Images)
Mugabe been desperately clinging on as Zimbabwean President since the ruling ZANU-PF party sacked him as party leader over the weekend and he missed Monday’s midday deadline to resign or face impeachment.
His grip on power has weakened since Wednesday, when the army intervened.
Zimbabwean journalist Georgina Godwin, who was kicked out of the country under Mugabe for setting up a broadcast station and came to Britain, wept live on air when the news was given to her on LBC. 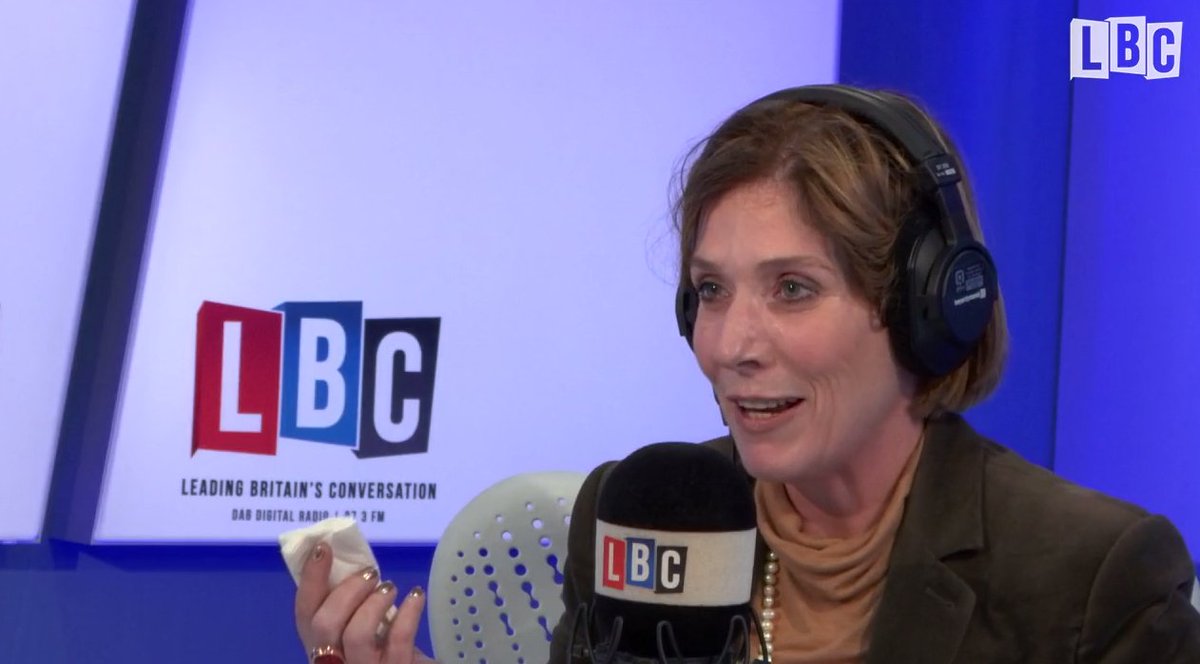 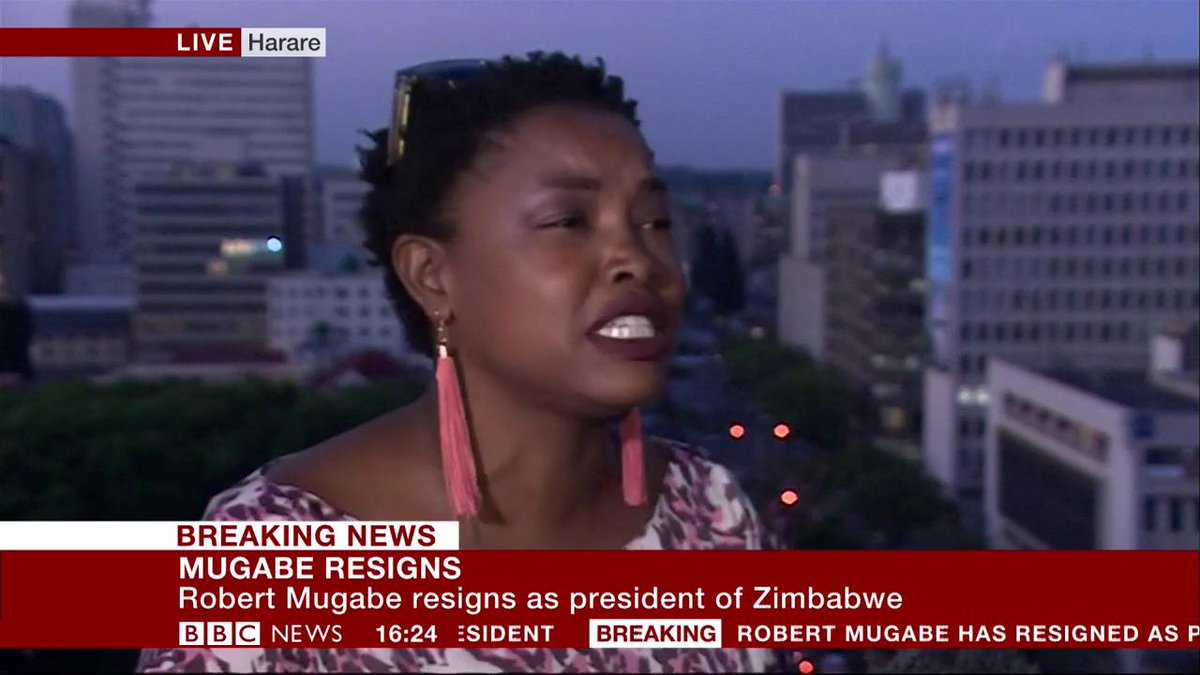 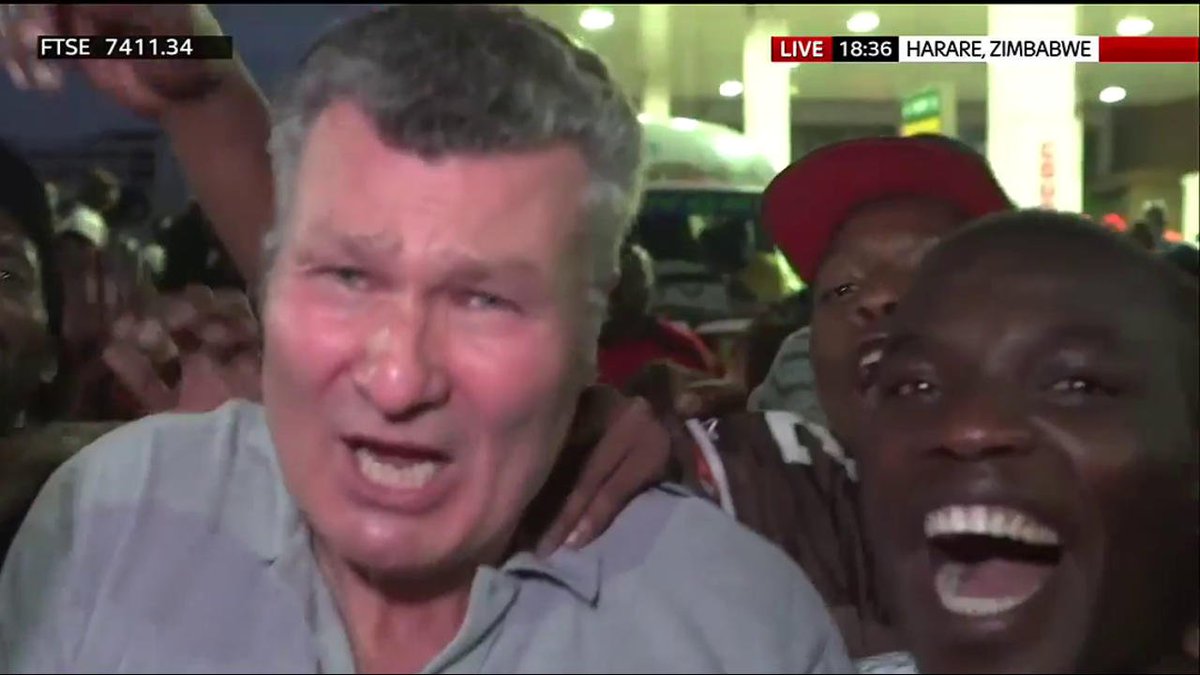 Crowds celebrate around our reporter David Bowden as he attempts to report on what Mugabe’s resignation means to the people of Zimbabwe
17:43 – 21 Nov 2017

Twitter Ads information and privacy
Mugabe’s letter said he was resigned to allow a “smooth transfer” of power.
Many anticipated that he would use his address to the nation on Sunday as an opportunity to announce he was stepping down.
But he gave no indication of ending his tenure as Zimbabwe’s leader and signed off with the words: “I thank you and goodnight.”
Following Mugabe’s address, the leader of Zimbabwe’s war veterans said impeachment plans would go ahead as scheduled after Mugabe defied expectations.

Zimbabwe’s members of parliament celebrate after Mugabe’s resignation on November 21, 2017 in Harare.
Robert Mugabe resigned as president of Zimbabwe on November 21, 2017 swept from power as his 37-year reign of brutality and autocratic control crumbled within days of a military takeover. The bombshell news was delivered by the parliament speaker to a special joint session of the assembly which had convened to impeach Mugabe, 93, who has dominated every aspect of Zimbabwean public life since independence in 1980.
/ AFP PHOTO / Jekesai NJIKIZANA/Getty Images
“Either somebody within ZANU-PF didn’t tell him what had happened within his own party, so he went and addressed that meeting oblivious, or (he was) blind or deaf to what his party has told him,” Chris Mutsvangwa said.
A Downing Street spokesperson said after Mugabe’s resignation: “We felt Mugabe had lost the support of people of Zimbabwe.”
His resignation could forge “an opportunity to forge a new path free of the oppression that characterised his rule”, they added.
During his reign, Mugabe took the once-rich country to economic ruin and kept his grip on power through repression of opponents, although he styled himself as the Grand Man of African politics and kept the admiration of many people across Africa.
Mnangagwa’s dismissal is what prompted the military to move against Mugabe, following fears that his wife Grace would succeed him.
Since the crisis began, Mugabe has been mainly confined to his “Blue Roof” mansion in the capital where Grace is also believed to be.
She has also been expelled from the Zanu-PF party.
Mnangagwa is a former state security chief, known as “The Crocodile”.
He is in line to head an interim post-Mugabe unity government that will focus on rebuilding ties with the outside world and stabilising an economy in freefall.
Zimbabwe’s Platform for Concerned Citizens, a civil society group, said that: “A National Transitional Authority must be the final outcome of a national dialogue.”
Click on any image to enlarge.